My Other Computer is a Data Center

I was pretty happy last week when Dewitt sent me the article that Marc Benioff wrote entitled Welcome to Web 3.0: Now Your Other Computer is a Data Center. It's a good article, but the really cool part of the article was the last paragraph:

One of our developers has a bumper sticker on his laptop that captures the spirit of Web 3.0 perfectly. It reads: "My other computer is a data center." That's a claim that any developer in the world can now make. And that's the stuff of revolution.

Why is that cool? Well, because I designed that sticker.

My Other Computer is a Google Data Center

I thought that was an awesome quote for the hosting page, but it was crying out to be made into a laptop sticker. After all, it's the perfect companion to the sticker I used to see around in the '70's, "My Other Car is a Rolls Royce". It's fun, campy, and, unlike the Rolls sticker, it's actually true!

I ran over to Andrew, who was running Google Developer Day (the predecessor to Google IO), and wildly tried to convince him that this was the sticker to give out at the conference. He wasn't convinced, but he was busy, and I forgot about the sticker.

However, two months later I went to Foo Camp 2006, and Chris DiBona was manning the Epilog 35 watt carbon dioxide laser engraver and I just knew I had to engrave something. My laptop seemed to be the obvious thing...

But what to engrave? I wasn't feeling particularly artistic, and I didn't want to do anything too weird since I use my laptop to give dozens of presentations every year. I then remembered the "Data Center" idea and decided to etch a giant "sticker" on the back of my laptop. The saying didn't quite flow right, so I pulled "Google" out of the middle of the saying and added a big Google Code logo and a link to the hosting page. It wasn't particularly artsy, but definitely geeky, and hey, it's contextual advertising if bring it when I'm speaking at conferences!

After cleaning the NeXT sticker off the back of my laptop and giving it a good scrubbing, I headed into the lab where Dave Recordon was etching his laptop and he kindly offered to help me etch my laptop in the interests of me not completely destroying it--after all, you only get one shot with a 35 watt laser. After three test runs on paper (at 20% power, of course), it came out perfect: 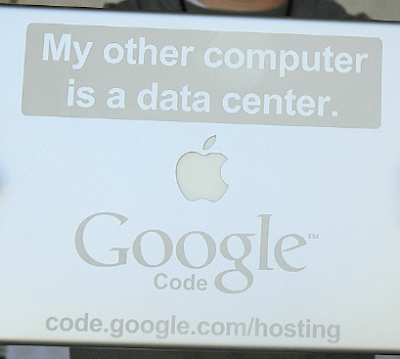 Over the next year dozens of folks wanted to know where I got the cool laptop "sticker" from because they wanted one. I explained that it wasn't a sticker, but a laser engraving ("Really? Cool!"). In early 2008, since PyCon was going to be in Chicago and I was giving a keynote, I decided it was time to get some stickers made to give out there.

I designed the sticker with the quote in white on black and placed the Google logo off to the side on a white background so that if people wanted to put the saying on their laptop but not the Google logo, the only thing standing in their way was a sharp scissors. 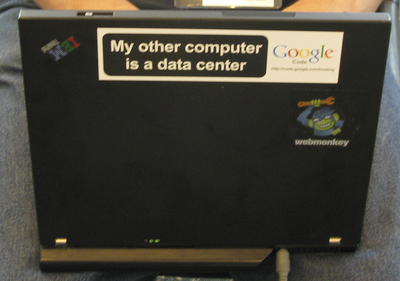 I ordered 1,000 and distributed about half at the conference and sent a few dozen off to Googlers in other offices who had asked for them.

Well, once those few stickers showed up in our offices, I started getting email after email from other Googlers wanting stickers. I cooked up another 10,000 stickers and sent packs and packs out to the teams requesting them, and gave a ton away at Google IO, OSCON, and various other venues. I've seen them on the laptops of VPs at work, hundreds of other Googlers, strangers at conferences, and even several Yahoo engineers! (with the Google part cut off, natch)

And now it's being talked about in essays by CEOs. Quite a journey for a humble little sticker.
Posted by Unknown at 3:18 AM

Ha! That's my laptop. They must have taken that picture at Google I/O (unless they're following me around to coffeeshops in North Carolina).

Excellent, how can I get one!?

Love the sticker. As a sysadmin, I'd really love to get my hands on one. I wouldn't even take the google logo off. I use google apps too much.

Just saw your sticker. Found your blog. Now I need to find out where I can get some!

I got that sticker too. Check out my post.

yeah! i got one of these at foo camp last year, and it's the only sticker on my mac air... i did cut off the google logo thou... i always get comments on it :) i'm actually trying to find an extra copy for a good friend right now... any thoughts?

Find me at a conference :)

I really really want this sticker. Is there a place where I can purchase it from online?