Failure IS an Option

One of my best friends works for NASA and a few years ago he gave me a Mission Control shirt that says "Failure is not an option". That's a fantastic motto if you're working in a situation where a mistake can cost lives, but a terrible motto if you're trying to innovate and invent. I've often half-joked around the office that our motto should be "Failure is an option". If you want to really push yourself, you've got to know that it's OK to fail sometimes. You pick yourself up, brush yourself off, and try again--failing is often the fastest way to learn. We've also been conditioned to think it's the most painful when it isn't--not by a longshot.

Scott Berkun blogged about the following video, which is basically a soft-sell ad about Honda, but at heart it's a story about the importance of failure. Well worth a watch.

I won't be needing this anymore: 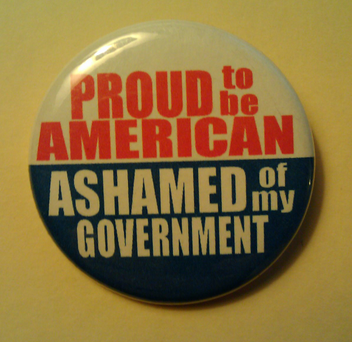 I've been waiting for this day for eight years.

See Jim and Rachel's Christmas Card. We showed it to everyone who came over to our house over the holidays.
Posted by Unknown at 9:48 PM 1 comment:

I just wrote a post for the Google Blog about some of the cool things we've done in the Chicago office with Bloxes. Check it out.
Posted by Unknown at 7:30 PM 1 comment:

What Happens When You're Out Of The Office for Two Weeks?

You get, um, downgraded: 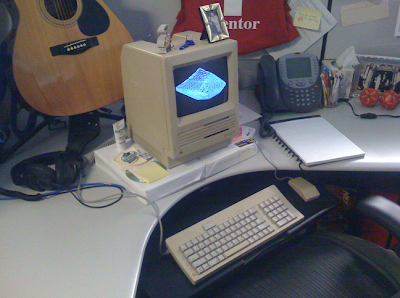 This was on my desk when I got back to the office on Monday morning. I think it was absolutely hilarious, and even better, it was a Mac SE, which was my very first Mac that I got back in 1991!

Thanks to Trow for pulling the outstanding prank, and especially for telling me where he hid my 30" monitor afterwards.
Posted by Unknown at 10:58 PM 4 comments:

My friend Steve spotted one of my datacenter stickers on the laptop of my colleague T.V. Raman, who is the subject of an article about web accessibility, among other things. T.V. has really done some amazing work to make the web more accessible for everyone, not just the blind and the vision-impaired.

T.V. and I started at Google on the same day and worked across the hall from each other for my first few weeks (until I returned to Chicago). He's an all-around great guy, an emacs guru (he wrote emacspeak, and
can never be found far from his yellow lab, Hubbell, who is a real sweetheart (be sure to ask permission before petting Hubbell though--it's best not to pet a work dog while their harness is on and they're "working").

Congrats on the press coverage, T.V.!
Posted by Unknown at 5:23 PM No comments: