As if Street View for Rome wasn't enough, now the Google Earth team has rolled out an ancient Rome layer:

I've often said that I wished I could redo college with Google Search, but I'd like to amend that to include Google Earth as well. Please? It's like flying through the model of Ancient Rome during the time of Constantine that I made the pilgrimage out to the Museo della Civilta Romana in EUR to visit.

A Plea for New Orleans

I was a guest on Voluntourism.org today, and we talked about having ApacheCon in New Orleans, why we had it there, and how we incorporated Voluntourism into the conference. ApacheCon chose New Orleans this year for a number of reasons, but one of them was an email that I wrote to the Apache Members almost two years ago in an attempt to help them understand why New Orleans needed (and still needs) all the economic stimulation she can get. I read this mail on the show today and agreed to post it on my blog, so here it is:

I'm totally fascinated with numbers and statistics, and I've been glued to FiveThirtyEight.com for the last month since it follows all the polls, but today's poll is the only poll that matters, so get out there and vote!
Posted by Unknown at 10:54 AM No comments:

For Halloween this year, I went as The Dude (Click for larger versions):

But what made it really great, was the fact that Walter dropped by to hang out: 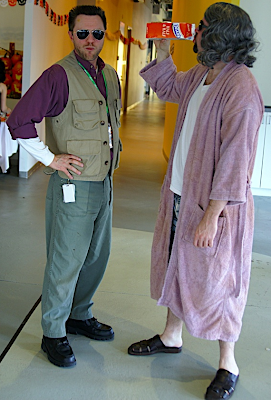 That's Jim, our esteemed director of sales for Chicago.

I think we really tied the room together.
Posted by Unknown at 9:28 PM 4 comments: